Happy Monday everyone!  It’s Military Monday here at Cammo Style Love and I couldn’t have asked for a better topic to discuss.  If you are friends with me offline or know me you may have heard one of my many OPSEC rants.  I even wrote an article for Spouse Buzz about it (in which some lovely readers told me I didn’t to take it easy with the caffeine).  It’s okay, I know I’m a little more OPSEC crazy then your average military wife, but that’s just how we are.  The truth of the matter is that I think the average Military wife isn’t OPSEC conscious enough.  However, I don’t necessarily believe it is all their fault.  They aren’t the military member, they don’t often get any training about it, unless it’s a deployment time.  Even then the training is severely lacking in my opinion.  I’m not entirely sure you’re average military member gets the training they need, especially with social media being what it is.  People assume too much.  People assume all things are private and that who would want to see what little ‘ole them might be talking about.  If you had a mama from West Virginia you might have heard this saying, “You know what assuming does?  It makes an Ass out of U AND MI,” get it?!

If I see one more person posting something like, “My husband will be finally home in ___ hours” or posting numerous pictures of all the decorations they’ve put up BEFORE there husband is home, my eyes might roll out of my head.  I’m sure people who will read this post will totally disagree with me, some of you may have even done those things.  That’s fine, you can totally disagree with me.  You can think I’m crazy.  But lets be clear, just because those are my opinions doesn’t mean I think you are some horrible person for doing those things, or that you take the safety of anyone lightly.  I promise I’m not thinking that.  What I’m thinking is that the military is doing a horrible disservice  to everyone by not making sure people are properly educated and making sure their own people aren’t doing some of these very things, therefore setting a bad example.

But, that’s not the worst of the worst.  I reserve ACTUAL feelings of hatred towards people that know better but choose out of selfish reasons to turn their back on everything they know to be right.  Most of you who watch the news have probably seen the story about the former Navy SEAL who has decided to publish a book about the Bin Laden incident.  For the record, Military members, including retired military members can not publish or take part in anything without approval from someone.  Do you know how many confidentiality agreements he probably signed?  And saying that its okay because he is using a pen name is absolutely the most ridiculous thing I have ever heard.  He talks about so much that there really is about three people who it could be, and trust me, everyone involved knows who it is.  I think it’s selfish and petty and frankly egotistical.  Not to mention disrespectful and about a million other things.  I personally won’t be reading it.   I will concede in saying that how can you expect people to care about this stuff when our own President and Vice President were willing to just toss around what SEAL team it was that participated in the raid without so much as a blink.  And its not like anyone could dispute that because disputing it would mean it exists, which they can’t do.  The world of Intelligence, and OPSEC and Top Secret, Classified is a complicated one.  And just so we don’t get all political here – I’m a huge fan of The Rhino Den – got to meet a couple of them at the Mil-Blogging conference – here’s a good article you might want to check out if you want to know more about this type of thing.

One of the comments I read was someone that said, “oh I think it will be so great to read about the SEALs and learn what they are really like and what they really do!”  Well, let me tell you there are plenty of other things out there that can help you do that.

Why don’t you check out these books for starters, both of which have proud places on our bookshelf.  You can win a copy of FEARLESS here on my blog as well. 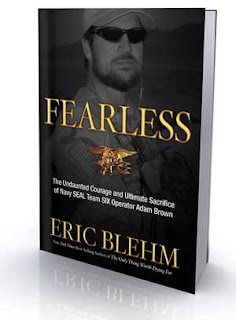 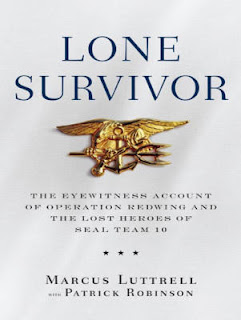 If you’re not a book person you can always watch 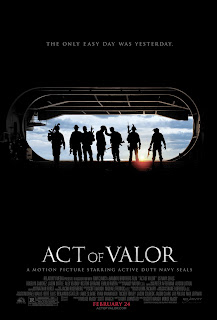 Like I said, these are just my humble opinion, and since I don’t plan on cutting out coffee or soda from my life permanently the caffeine will probably continue to make me crazy.

Have a great week everyone!  I promise, crazy rants like this are extremely few and far between, but when someone like this comes up I feel like talking about it doing the right thing by those I admire and especially in honoring my husband.