Today is MilSpouse Appreciation Day.  It may seem silly to some, but as long as there is a National Hot Dog Day why not have a special day to show appreciation to Military Spouses around the world, for the role they play in keeping the homefront united.  All over organizations are and bases are honoring spouses with events, outings and gift baskets.  This year I set out to accomplish something that I felt was sorely missing from the days’ events.  There is a group of forgotten spouses.  I know because for a very long time I’ve been one of them.  This isn’t mean to be a big ‘ole pity, feel sorry for me, give me free stuff party.  The truth is, I’m very blessed.  Blessed by family, friends and those my husband has served with that have become family.  That doesn’t change the fact that a large group of spouses are largely forgotten.   So when I discovered many events were excluding traditional Guard and Reserve spouses from events around the DC area I decided to try and do something about it.  While every group can not meet the needs of every person, its a slippery slope.  It creates the standard that its okay to forget them and other people pick up on that stuff.  I decided to put together gift bags for these special spouses but quickly ran into a wall.  See, we were collecting donations for two groups of spouses.  Every donation that came in was given with the specific directions that it be provided to one group of spouses and not the Guard or Reserve spouses.  I was shocked.  I don’t know why…I probably shouldn’t have been.  The population as a whole is largely uneducated when it comes to the National Guard and Reserve, this also included other military members.  If this weren’t true there wouldn’t be any need for the bumper sticker “One Weekend a Month, two weeks a year my A**.” 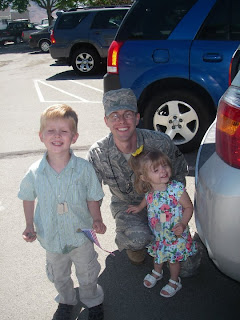 This attitude is real and is occurring everywhere.  For the majority of our career we were remotely stationed on a Guard base.  I use the word “base” lightly….very lightly.  All that was there was the work buildings.  We had no housing, no child development center and no commissary (closer than 2.5 hours away).  I went through an active duty life with no active duty help.  No moms night outs, no Operation Shower, no free Christmas trees or other events to deal with deployments, travel or anything else.  We didn’t have a lot of programs out there, mostly because I think people didn’t realize or ask….or know much else past the fact that it was a National Guard base.  What they didn’t realize that there was a huge proportion of full time people stationed there.  My husband went to work every day in a uniform.  This is the problem that I am seeing over and over again.  I see it in blogs of MilSpouse friends.  I see it in articles and in the conversations of people I’ve met.  It hit me harder when it was translated in a much bigger level to me in the form of two donations for eight gift bags.  The amazing author Geri Krotow, which I’ve mentioned on here before, donated some of her books.  And then my friend at Blue Star Families was able to put together some great stuff for me.  I will be able to bless some military spouses and I’m thankful for that. 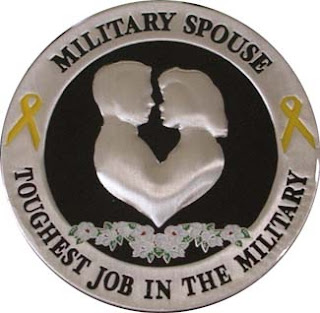 The point of this is to charge you all to remember those that are forgotten.  Every spouse is unique in their own circumstances.  Some branches and career fields deploy more frequently and for longer than others.  Some hardly ever deploy.  Some are firefighters and others work in finance.  They are all equally important to make an effective force.  Without one part of the wheel it wouldn’t role.  The Coast Guard might be a part of Homeland Security, but that doesn’t make them less military.  Have you seen some of the stuff those guys do?  I know that the “war between the branches” is mostly done in jest and fun…..but there can be damaging consequences to those words. 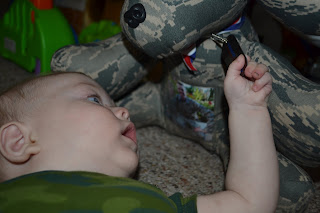 If you know a Guard or Reserve spouse, say a special thanks to them.  Not because they are more special or better than other spouses, but because they deserve as much thanks as any other spouse out there.  Because when their husband was in the field or on a deployment they might not have been within drivable distance of a base to have a mom’s night out.  There might not be an frg to keep them in the loop, or tell them about special events.  They might have to figure out how to pay for uniforms and equipment because it isn’t issued.  Thank them for their own unique experience….as unique as the wife of a Marine, the wife of an officer, an enlisted, a dual military marriage, a recruiter’s wife, a fighter pilot’s wife and any other essential part of that wheel. Happy MilSpouse Appreciation Day to all my millies out there!  I love you and am so thankful for all you, those I know and those I only know through that special millie connection.

I’m linking up today with Wife of a Sailor!