It’s been awhile but I have some book reviews today, HOORAY!!! Ever since I got really sick and pregnant in the summer of last year its pretty much been like I’ve been living my life going 100mph. Really sick, then catching up from the sick, then prepping for baby number three, then preparing for the holidays out of town – Thanksgiving and Christmas. Then, having baby number three and getting ready for a cross-country move. I mean, seriously, I give myself a hard time about it because that’s my personality. I really enjoy walking on the edge of sanity and serious mental breakdown/anxiety overload. My husband swears I do at least. Last year I had a seriously ambitious reading goal, which I completely failed at. This year I’ve lowered it significantly and I’m already feeling like a failure. Not to mention I haven’t done any knitting, crocheting or scrapbooking since I had Phillip. Now that I’ve completely turned this into a venting post, on to the good stuff. I have two books to review for you, both of which I love. I had previously reviewed the second book in the Winston Churchill thriller series by Michael and Patrick McMenamin, The Parsifal Pursuit.  Thanks to Business2Blogger for the opportunity to review these books as well.  I really love this series, as I mentioned before, so I was very excited to read this third installment.  The Gemini Agenda proved to be every bit as good as I had hoped it would be, and its safe for me to say that it was actually my favorite.  Here’s a brief little summary – 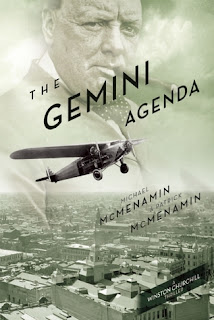 A string of strange deaths in 1932 leads Bourke Cockran, Jr., and his lover Mattie McGary to uncover a plot by Nazi scientists to conduct lethal experiments on American twins in order to create a master race.
They confront an international conspiracy connecting Wall Street to Washington, DC; from Long Island’s fabled Gold Coast to the marble corridors of the Barlow Palace in Munich, headquarters of the fast-rising Nazi Party; and finally to a sinister clinic hidden deep in the Bavarian Forest. The Gemini Agenda is a historical thriller, the third in the Winston Churchill trilogy.


I really don’t wanna give too much away about the book because they really are that good.  It will satisfy a lot of different people I think.  People who just love a good mystery, history lovers, or people that just appreciate a good book.  Its information intense, which I love.  You have to pay attention and you learn so much.  And, like with the last one, Michael and Patrick have taken great pains to ensure the historical integrity of the book.  I have read a lot of Historical Fiction books, because it is a genre that I really enjoy.  These books are some of the best out there.  If I didn’t know that there were fiction items in it I would believe that this truly and actually happened exactly as written.  It isn’t over the top or outlandish and stays true to that era.  It was crazy enough then to not need to really go overboard.  I highly recommend this book.  Please check out the McMenamin’s website to read more about them and their books.  You can purchase a copy here on Amazon.

The next book on my shelf is Be The People: A Call to Reclaim America’s Faith and Promise by Carol M. Swain.  BookSneeze has given me so many great books to review and read.  I’m a lucky girl. 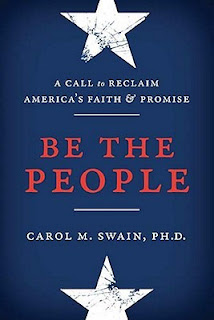 An insightful analysis of the forces of deception rapidly reshaping America’s morals, social policies, and culture, with a call to specific action, written by a thoughtful and courageous Christian social scientist on the front lines of today’s issues.
Cultural elites in the media, academia, and politics are daily deceiving millions of Americans into passively supporting policies that are detrimental to the nation and their own best interest. Although some Americans can see through the smokescreen, they feel powerless to redirect the forces inside and outside government that radically threaten cherished values and principles.
Drawing on her training in political science and law, Dr. Swain thoughtfully examines the religious significance of the founding of our nation and the deceptions that have infiltrated our daily lives and now threaten traditional families, unborn children, and members of various racial and ethnic groups-as well as national sovereignty itself–and provides action points for the people of this country to make the political system more responsive.
The book is divided into two sections: Forsaking what we once knew, Re-embracing truth and justice in policy choices
It also covers key topics such as: America’s shift to moral relativism, America’s religious roots, Abortion’s fragile facade, Historical and biblical views on families and children, Erosion of rule of law, national security, and immigration, Racial and ethnic challenges, Reclaiming the future.


I gotta say, this was a fantastic book.  It got me all riled up, and that’s a good sign.  It was a rare perspective from someone with her background.  Because everything inside me would have guessed that she’s the opposite.  Now I know that might not be the most PC thing to say, but lets be real, I’m not PC.  Another thing to be real about is who will like this book.  Even though I think that anyone, from any view, should read this book, you will either love it or hate it.  As an African-American, highly educated, Woman she provides a unique view on these topics, and one that people might not expect.  I feel torn as to how to really review this book.  Clearly I am biased, but aren’t we all.  I’m probably not going to change your mind and you probably won’t change mine.  I feel like if people accepted that we’d get along a lot better.  If we spent less time arguing to change each other’s minds we might learn a lot from each other.  There are so many topics covered in this book and it is easy to get on information overload.  However, it proves to a smooth and easy read.  It is very conversational and it was enjoyable to read.  It re-lit a fire in me and helped me to gain a new perspective and understanding on beliefs I already held true.

I recommend this book.  It’s great, and it gets 4 Stars from me.