Some thoughts this Memorial Day

Well it’s Memorial Day and I had wanted this to be my week for my Military Life Series (check out the first post here). I sat down to write my post, about my strange military life but I kept hitting the backspace key, typing more and then deleting more. It’s too hard. My life is hard, the hubby is gone a lot and I respect the USAG and OPSEC and I guess I’ll just leave it at that. I will say for our time in the service we have been far away from any sort of military community. No commissary, no PX, no real Family Services to speak of and that has been one of the hardest parts recently. Before we had kids I really could have cares less. I got myself involved where I could; and far less people had kids so it wasn’t an issue for me. After having kids that got harder and harder. I was grateful for what I had and tried not to dwell on what I didn’t. I’ve been through deployment time alone, tdy alone, other various trips and I’ve survived. I know I’m not alone. I know others walk with me an have walked before me. I know I’m far top sensitive about things too. The war between the branches bothers me, even though I know somewhere inside most branches respect each other for the tasks they do to provide support for and protect each other. The looking down upon of National Guardsmen and women bothers me because it usually comes from a place of not knowing.. There are full time men and women who provide support every day for the war, amazing things that go unnoticed and not talked about. There are traditional Guardsmen who do the same. Just because they don’t put on a uniform every day doesn’t mean they are any less deserving of our love, support, admiration and respect. For the most part I think (at least I hope) they do.

On Saturday we had the honor of hanging out in Section 60. We were going to lay some yellow roses on a couple graves. It was perhaps the most humbling and connective feeling I’ve ever had. I walked among friends and family with their blankets laid out, their folding chairs, friends toasting beers to their buddies and thousands and thousands of little flags blowing in the light breeze. It made me think that everything else just doesn’t matter. Rank, pay, job, branch…..none omit matters here. I met a new family of a fallen soldier who came up to me as we were laying flowers on our grave. It was an instant connection and now I’ve added that soldier to my list. Among others we visited we remembered Lance Cpl Daniel Bennett and Sergeant Sean Ferguson. This time I also wanted to find grave sites baring our last name and my maiden name. We did and the kids laid flowers on there as well. We talked about honoring those who keep this country free and in their little 3 and 5 year old brains they understood for just tht moment. I saw an older gentlemen salute the gravestone of someone. I don’t know what the connection was but it doesn’t really matter. It was the most moving thing to me that day. 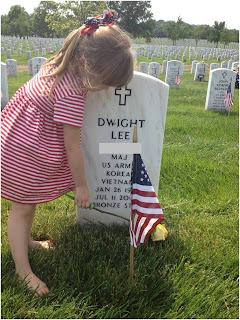 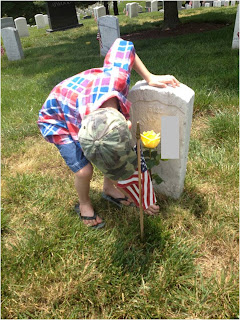 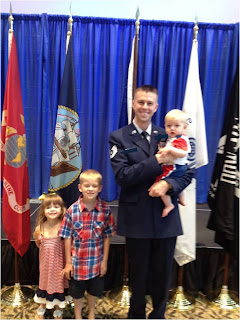 This morning I also had the honor of attending the Air Force Memorial wreath laying, with special recognition given to The Tuskeegee Airmen, the men and women of the Mighty 8th, and the forgotten Flyin Tigers who protected and flew over China during WWII. It was a beautiful ceremony a during taps my adorable son joined the others in a hand salute. I couldn’t snap a picture, which was a bummer as a snap happy mama, but it was meaningful to me and several others who saw him do it.

So this memorial day I am grateful. Not just for my husband, but my grandfather Sergeant Major George M. who served in the Army National Guard in the Korean War and my other grandfather who started in the Army Air Corp in WWII as a top turret gunner and ended his career as a Master Sergeant in the Army, and my Great Uncle who was KIA and MIA for a period of time in WWII. I am grateful for the two graves we discovered today, who share our names. One gentleman Served in Company E, 7th Infantry Division and died in 1891. The other was a Major who served in Korea. Its a connection to our past. Even though we probably aren’t related to these two gentleman, its still an honor nonetheless. So I close these thoughts, grateful for where I am, grateful for what I come from and what I can pass on to my children. Grateful that I am here in the DC Metro area and can be a part of these things. So glad that my child, even though they are mostly too young to really understand, can be a part of it as well.

And on this memorial day, some treats for those that are still serving (and anyone else that might like to take advantage of this stuff):

If you saw my post about meeting Scott, director and producer of Act of Valor, who might have seen the trailer and heard that the DVD/Blu-Ray are set to come out in a couple days. Well, 20th Century Fox would like to provide my readers with a coupon code for the film which releases on June 5. Please enjoy $3 off and free shipping with coupon code “VALOR” valid 5/19-6/17 at http://www.foxconnect.com/valor. I also wanted to let you know about JollyBox. It is a pretty awesome company that puts together and delivers themed care packages to your deployed loved one! You can leave it up to them, and you can fill out a special survey so the box can be customized for your loved one. You can also include a special personal note. For just $25 you can have your very own JollyBox created. I know that I love the fun of making my own care packages, especially including the kids in it. In fact we just did one for a very close friend. But sometimes it might be nice to have one sent out during a time when I might be on overload with running things around here by myself. I think its a great idea! I could also see it being amazing for the adopt-a-soldier program that I work with through Soldier’s Angels. I also have a coupon code for you with JollyBox! You can get $10 off your first month just by entering “First10” during your check out! Thanks for stopping by and I hope you enjoy your memorial day coupon treats from Cammo Style Love!

Enlisted, on FOX, hits the airwaves