Welcome to the third post in my Military Life Series!  I hope you can check out the previous two posts from A Boy, A Girl and The Marine Corp, and Aim High Erin.  The goal of this series was to focus on and highlight situations within the already crazy military life, that just make it that much more crazy.  I know, before I got myself really connected with some fabulous military girls I frequently  felt lost and alone.  Was anyone else going through what I went through?  So these posts are a way to connect people, to show them that they aren’t alone and to help them through a situation in life.  I know there are other people in the same life situations as these fabulous ladies!
I’m so happy to have Lynn here for my third guest post.  If you get a chance to go check out her blog I know you’ll love it.  She’s super great.  Here’s a little bit about her:
Lynn is mom to an incredibly charming, mischievous 18 month-old boy and a dog who hates the rain. She blogs at http://wanderlynn.wordpress.combecause she still hasn’t figured out how to not do some kind of work on the computer since leaving her marketing job when the little guy was born.
She and her husband, an officer in the US Air Force, just celebrated their 7th wedding anniversary at a rather fancy restaurant in the east of England. She’s a Midwestern girl who sometimes misses the soul-warming heat of her college days in the South. 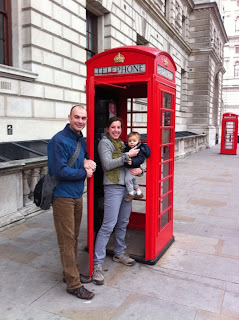 My Military Life – Getting that Overseas Assignment
By wanderlynn
A big thanks to Rheanna for asking me to write a guest post about our military life overseas!
The prospect of seeing the world was dazzling when we got married, me just out of grad school and him just out of training. Then this strange thing happened, where our Big Adventurous Military Life started off as anything but. As in, we started off with more than half a decade in Omaha, Nebraska.
We settled in nicely there. I began my marketing career, got involved in a variety of community projects, and made friends. We got used to regular deployments and not seeing each other for about one-third of each year. We were DINKs (dual income, no kids) in an awesome neighborhood, and started to believe we’d never leave.
It wasn’t until we had two dogs and an infant that we learned we’d be moving to England. (Isn’t that how it goes?)
The news was thrilling in the exciting-scary kind of way. We were finally leaving! And going to ENGLAND! But we’d have to sell rent the house, and pack it all up, and fly overseas with a 6 month-old boy.
The concept of moving seems simple. Pack, move, unpack. The reality is vastly different. There are a ton of moving parts in getting everything and everyone from Point A to Point B, particularly if there’s an ocean involved. Toss in a healthy dose of unfamiliarity with processes and destinations and, BAM!, you’ve got yourself one heck of a mess.
Being a novice mover (but a professional project manager), I was stunned to discover that there was no “account manager” or point person for the giant cluster that is moving. Rather, I was not prepared for that person to be me, and to have to balance those duties with full-time care of an early-mobile infant.
Of course, there was a deployment hanging over it all. Perhaps I was pushing off full responsibility to my husband to take advantage of him while I could, up until our 10th day in our new, empty, English house.
Ultimately, the transition was challenging mostly because I had no idea what I was doing. I wanted to blame it on the fact that our household goods took three months to arrive, making it impossible to feel like “home.” But the truth is, I had no idea what to expect and was embarrassingly unfamiliar with the processes and offices involved. It felt like there were a million moving parts that somehow intersected at our house while flailing wildly in every direction.
We received information booklets and checklists from so many places – Airman & Family Readiness, the vet office, Pass & Registration, the housing office, the medical group, the squadron, the VAT relief office (which, thankfully, provides relief for Britain’s 20% sales tax on many large purchases) … sometimes there was conflicting information, sometimes information was flat out wrong. And usually an office was closed or a person wasn’t available.
Next time around, I intend to take the PCS bull by its horns and handle the frenzy with authority. And you bet I’ll make plenty of phone calls to get my program straight before I start running all over base to do it!
There are certain things, though, that you just can’t anticipate.
How hard it is to miss your family and not be able to pick up the phone to call any time of the day (that is, unless they’re cool with calls in the wee hours of the morning).
How hard it is to miss your family and not be able to hop a cheap flight or take a long car ride to see them.
The lost feeling many of my friends here share, from not working after having established ourselves in challenging careers.
The intense feeling of isolation of the stay at home mom of a young child, without your “village,” in a new country, while your husband is away for months.
But we get by. We adapt to this “normal.” Then we hop cheap flights to Europe to squeeze it in while we can. And before we know it, the tour is up and we do it all again… maybe closer to home?
Thanks Lynn and have a fabulous Friday everyone!!!
Copyright ©  2010 Cammo Style Love
Cammo Style Love