This past May I had the awesome experience of attending the Military Blogging Conference in Arlington.  It was amazing and I met so many wonderful people.  One of the absolutely wonderful people I met was the absolutely darling Cameron from Military Town Advisor.  Seriously, she is sweet and darling and has come up with an amazing and cool website.  Something I wish I had known about before we started looking to move.  I’m thankful we were lucky and ended up in a wonderful neighborhood, but seriously, how do you know for sure when you are going anywhere?  Areas vary from street to street, and you never can tell whats up until you are there, or you send someone to wander the streets of the area you move into.  Real Estate people can’t really ever tell you the down and dirty and unless you are moving on base, the area around the base might be a crap shoot.  Thankfully now there is Military Town Advisor, your one stop shop for all the information you need in your neighborhood.  I recently just submitted my own review of the last neighborhood we moved out of and it was super easy.  I will continue to submit reviews concerning neighborhoods that I’ve lived in.  So, without further adieu, let me introduce you to Cameron, a fellow Mil-Spouse. 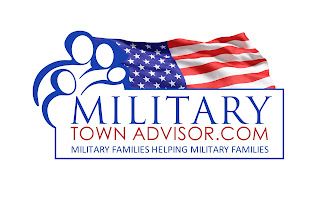 How I came up with the idea of MilitaryTownAdvisor.com:
As newlyweds, my husband and I were stationed in Kingsville, Texas. I was new to military life and the only information I knew was that we were either going to a base on the East or the West Coast. I immediately began researching both coasts and attempting to gather as much information as possible. I quickly learned that the majority of information that can be found on the internet about towns and areas are tourist guides and statistics about the demographics of the area. Or I would go on Facebook and ask other military families and they always suggested areas that were good for their lifestyle not areas that fit my family’s needs.   I ended up discouraged and resigned to the fact that I could not go any further in my research until we received our orders.
When we got our orders and were headed to Virginia Beach we spent seven days looking for a place to live. We contacted a realtor and she started showing us homes.  She took us all over Hampton Roads and didn’t really listen to our needs.  This took up a lot of time and we wanted to buy a house all in a week’s time frame. Needless to say, we were extremely nervous about picking a house in the right area. Luckily we found a house in a great area, close to the base, with good school districts; however, this was not the outcome for many of our fellow military families. Some of our new friends chose homes far from base where it may have been more cost effective, but they ended up regretting being so far from the activities that are centered around the base. Also, others chose neighborhoods that were close to the base but did not end up feeling safe in those areas, especially during deployments. As each new family told me their story, the concept of MilitaryTownAdvisor.com was born. I knew that military families were the best resource for other military families. I understand the uncertainty and fear that can come with a quick move to a new part of the country, the lack of readily available information, and the need for each of us to be able to learn from each others’ missteps and successes.
How this site is unique: First, all of MilitaryTownAdvisor’s content is written by other military families in the form of reviews. It’s like TripAdvisor for military towns!  The reviews focus on neighborhoods, areas of towns, and schools.  Military families are different than other home buyers because they aren’t looking to purchase their ‘dream’ home. They want their families in safe, family friendly, social neighborhoods that are in good school districts and within a decent commute to base.   Military families are willing to give up ‘dream home’ extras for a good neighborhood. The site is a way for other military families to share their knowledge about where to live.
How to use the site: When you get your new orders, go to MilitaryTownAdvisor.com and search for reviews near your base. Read the reviews and make note of neighborhoods that fit your family’s lifestyle and needs. Then contact a realtor or go to sites like MilitaryByOwner.com and start looking for homes in those neighborhoods.
How we met: My husband and I met at Texas A&M our senior year. We shared the same major and started dating. After school was out, we both moved to Houston and my husband began working for his family and I worked at a bank.  After experiencing the ‘real’ world and being unsatisfied, my husband decided to fly for the Navy. We married and moved to Kingsville, Texas for his advanced training in jet aviation.  We both are Texans and have enjoyed moving around with the Navy, but hope to move back to Texas one day where we can have grandparents close by to help raise our kids. 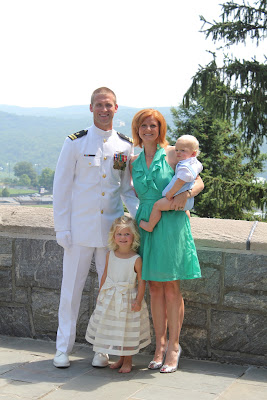 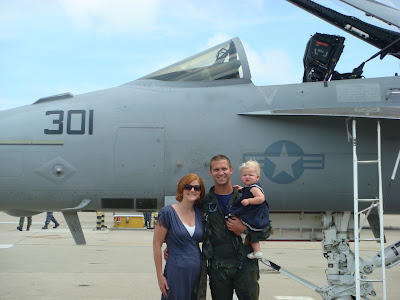 About me: I graduated from Texas A&M University with a BA in Finance. I played Division 1 Soccer for Texas A&M all 4 years, in addition to being in the Pi Beta Phi sorority. I worked for a Comerica Bank in Houston for 3 years, then was a 5th Grade Math Teacher in South Texas (while hubby was in flight training), then once we were stationed in VA Bch, I have worked as a Pharmaceutical Sales Rep for GlaxoSmithKline for the past 6 years. I launched MilitaryTownAdvisor.com 6 months ago in Jan 2012 while having and infant and a 3 year old.
Upcoming: I am the ‘Resource of the Week” on Amy Wife Network Talk Radio http://www.armywifenetwork.com/ Listen to the show at 8pm (i go on about 9pm) Monday July 16th, 2012!!
Current Promotion: For the month of July, we are donating $1 for every review left on the website to Operation Homefront! 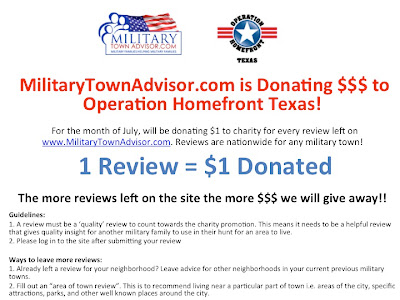 Excuses only go so far…..

Deployment Dare: Patience is a Virtue