It is time for another Military Monday, and I really wanted to take some time to acknowledge the fact that September is Suicide Prevention Month.  I always think these “month” things are so stupid…why do I need a month to specifically acknowledge something that should be acknowledge all the time.  But I realize that there are good things that come out of it.  For one, it gets people talking.  Even if I believe people should be aware of these things anyway, there’s nothing wrong with getting people to talk about it.  It might cause political and public leaders to really pay attention to something when there is a giant surge in coverage of a certain topic.  That is something I can get behind.

Well, the subject for September is something that really upsets me.  I don’t think people are aware of the staggering numbers of military members ending their lives when they return home AND the even more unbelievable numbers of service members killing themselves while deployed.  People need to step up and realize that this is real, that this is going on.  In response to this many branches and government officials are stepping of their game and talking about it more.  That’s a great first step.  The culture of the military is not one that changes easily, and I wonder if it was more acceptable to ask for help if the numbers of suicides while home or deployed would change.  Although,there are several things we must think about before we would really ready to deal with the topic of military related suicides. 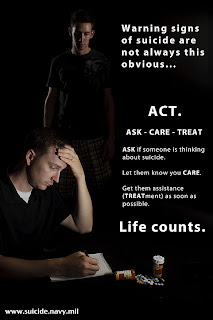 First thing I think we need to accept is the fact that there are many suicides that happen outside of the contexts of war.  War does not mean suicide.  There are many of our men and women that don’t commit suicide.  It is also mainly understood that many suicides are unplanned and mostly spontaneous, and sometimes as a result of one event that sends someone over the edge, making predicting them extremely difficult.  Personally I don’t want to accept any of these things because I feel like people can use these thoughts as a way to gloss over the issue, forget about it and sweep it under the rug, which is NOT acceptable.

The Navy recently announced their plan to raise a general awareness of the issue.  Each week new resources will be available to guide discussion on stress management and suicide prevention concepts.  Education and an open dialogue are so important when it comes to issues of depression, stress and suicide.  My personal opinion is that communication and an open dialogue is so key.  I feel like there is a general belief that it isn’t okay to talk about when you can’t handle things, and this may be more concentrated in the military.  Admitting you are struggling with something is seen as a sign of weakness, and the feeling that you’re the only one feeling that way because no one else is talking about it, only makes it worse.

I think Leon Panetta, in his interview with USA TODAY stated some of my thoughts perfectly as an answer to one of the questions asked of him that day:

Q: According to the Pentagon, U.S. troops are dying by suicide at a rate of more than on a day, what can you tell Americans about why this is happening?
A: It is a complex problem with no quick fixes. Part of it I think is due to a nation that’s been at war for over a decade. You have repeated deployments and sustained combat exposure to enormous stresses and strains on our troops and on their families that produced a lot of seen and un-seen wounds that contribute to the suicide risk. At the same time, we’re dealing with what is a broader societal problem. I think CDC (Centers for Disease Control and Prevention) said something like 37,000 are committing suicide nationally. And that means we have to deal with some of the broader societal issues: substance abuse, financial distress, relationship problems, the kind of risk factors that endure even beyond our involvement in war. So it is, I think, very much a problem that not just the military, but society in genera,l has to confront and deal with.
Source
I think for as much of a responsibility I believe the Military and the leadership within, needs to take, I think its also important for friends and family to be educated as well…not only for themselves, but for their service member.  Friends and family are just as much susceptible to issues of stress, depression and suicide.  We may be lacking in support in our various situations as well.  I know that I have thought to myself, “geez, why can’t you handle this, keep it together Rheanna.  Other people have it way worse then you.  Look at what your husband is going through.”  These are all dangerous thoughts.  Perhaps versions of these same thoughts are going through the minds of our men and women serving.  It doesn’t matter what your situation is, even if you think you should be handling it better..that’s not the point.
Below I have highlighted some links that I have looked at that I think are a step in the right direction.  Major change can be hard, but I think we owe it to ourselves, our Veterans, the families and our countries to make that hard change. One of the best programs that I’ve seen is The Wingman Project of the Air National Guard, so make sure to check that out below.

Links:
Navy Suicide Prevention
Navy Stress
Army Suicide Prevention Link
Air Force Suicide Prevention Links
Marine Corp Links
Coast Guard
Military One Source – I had a friend just go through this process of getting a counselor through them.  They are so helpful.  You will need to give standard identification information but it has all remained completely confidential.
Iraq and Afghanistan Veterans of America (IAVA) – I had the extreme pleasure of speaking with Tom Tarantino (Chief Policy Officer and Veteran) at the MilBlogging Conference this year.  I urge anyone who is serving or has served tap into this amazing resource of people who are serving or have served.  They have been there.
GotYour6
Air National Guard – Wingman Project
Army Guard

#MilitaryMonday – What’s the Deal with TriCare?