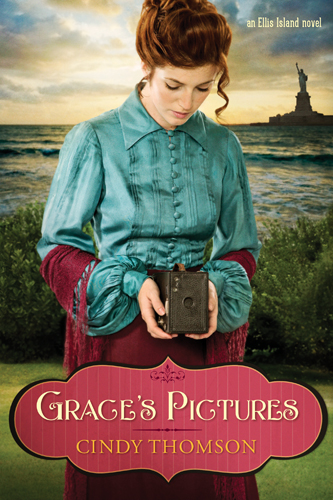 I am so excited to be taking part in Tyndale Publishing’s blog tour for Grace’s Pictures, by Cindy Thomson.  Please visit Cindy’s blog to find out more about her and the other books she’s written.

Let’s learn a bit more about Cindy and her book

1. What was your inspiration for this book, Grace’s Pictures?
When the Brownie Camera was introduced, it changed photography forever. What
was before expensive and not very portable, suddenly became available for the
average person. I read a contemporary commentary that expressed the concern that
with everyone carrying a camera, someone could have his/her photograph taken without permission, and what an invasion of privacy that would be. That got me thinking…what if that happened, and at a time before there were very many mug shots available of criminals.
I love writing about immigrants because their stories are a part of who we are today. If not for their bravery and ingenuity, our lives would be much different today, and probably more difficult.


2. Tell me about your main character, Grace McCaffery. Was her character based upon anyone in particular?
Grace comes to America wounded by her experiences of having an abusive father, being evicted from her home by the police, and then having to survive in a workhouse. When her mother gets remarried, to a policeman no less, Grace is horrified. In her mind, avoiding the kind of people who hurt you is the only way to stay safe. When she is sent to America to start a new life, she is not certain she wants to go. She wishes for the confidence and joy she sees in others around her, and she tries to capture it in drawings and snapshots so she can better study it. I know a lot of people, me for one, who would rather observe for a while before stepping out and trying something new. But historically, immigrants could not do that. They were thrust into change and had to adapt and endure.
Grace, like most fictional characters, is not based on any particular person. She is a conglomeration of our grandmothers and great-grandmothers who came to this country seeking a better life, but without many options to support themselves. They must have been frightened at first by this vast new country, but somehow they overcame that fear and founded our American families.
3. What lessons or truths will your readers find in the pages of this novel?
A lesson that I hope is learned in this story is that God provides what we need, but many times it requires us to put aside our preconceived ideas. No matter what disadvantages we start with, we can turn things around, with God’s help.
4. How do you expect Grace’s story to resonate with women?
Grace, a young woman who was not nurtured much as a child, becomes a nurturer. She is a nanny with a role that becomes essential for the children she cares for. I think most women are nurturers. Unfortunately, Grace had a far from ideal childhood. I think many women struggle with not having been nurtured themselves. Grace’s story illustrates the hope that God can turn that around, and even in unexpected ways. Grace meets someone who cares for her, who just happens to work in that dreaded occupation—a policeman.
5. As a writer, what did you particularly enjoy about crafting this story?
I loved learning about Ellis Island, visiting New York City, and imagining those immigrants of the early 20th century moving along the same paths I was exploring. I loved writing about how the children Grace cared for helped to change her. History is fascinating to me, and it’s a privilege to be able to write about it.
6. What is your hope for this story? How would you like it to impact readers?
I hope readers will be transported to a time in history when everything was changing at a rapid pace and experience a bit of what their ancestors’ lives were like. I would like readers, through Grace’s Pictures, to not only appreciate the sacrifices their ancestors made, but also find the courage to meet their own challenges—everyone has them.
7. How has this novel helped you to grow as a storyteller?
Grace was at first a difficult character to figure out. I had a loving father who passed away a few months before I started working on this book. Grace, who did not have a loving father, stretched me a bit, but it was good to explore what life was like for her and try to imagine how someone like her could not only survive but thrive.
8. What is it about this time period in history that made you want to write about it?
New inventions were constantly popping up, things that we take for granted today. For instance, telephones were becoming more widely available, but immigrants were not familiar with them. Same with electricity. There was a huge disparity between the rich and the poor, and the middle class was the minority. Monopolies were not yet forbidden. The rich were extremely rich. The poor were extremely poor, and the conditions in the tenements were disgraceful. And yet, this was not overlooked. There were gangs and corrupt police, but also scores of charities working hard to protect, educate, and care for immigrants. And it was also a time period of huge numbers of immigrants coming to the country, most through Ellis Island, so in that way this time period has impacted a great many Americans today.

9. What lessons can we learn from the pages of historical fiction?
The Bible tells us, “Stop at the crossroads and look around. Ask for the old, godly way, and walk in it. Travel its path, and you will find rest for your souls” (Jeremiah 6:16, NLT). Historical fiction uses the power of story to help us find those old ways. We deceive ourselves if we think no one has experienced the struggles we have. Someone has. Why not learn those stories and be led by them?

10. What is one of the best pieces of advice or encouragement you have received?
I’m always open to sound advice. Here is one that has encouraged me. It’s from a tea bag quote.

I love a good historical novel.  It can be a tricky thing because you’re messing with history.  It is stuff that has already happened, so you have to be careful.  Whenever I read one it has to be able to transform me to that time and place.  I need to be able to imagine that this is something that could have actually happened.  Perhaps my favorite part about this book is the inclusion of the Brownie Camera.  It was such a revolutionary item, and something that gave just about everyone access to pictures and a way to preserve memories.  In a time where memory was the only way to preserve the past, being able to take pictures was pretty much life-changing.  This fact alone made the story so great.
The character of Grace was an interesting one for me.  I really liked her, but as the story went on I felt it was harder to keep that going  There were maybe a couple chpters there where the story seemed to be dragging a bit.  There was a lot of stuff going on, several different stories and I really didn’t feel like they were explored to the fullest.  At times it was difficult to also fully take in the reality of the times.  Communication was difficult, people’s experiences were rough and sometimes down right horrible.  As a result there were times I found myself frustrated with the character of Grace and her attitudes toward the police and her step-father.  I kept having to remind myself that there is so much unsaid history that you can’t fit into a book.  Our world and reality is so vastly different then the very real one portrayed in this book.  Sometimes its hard to put yourself in the position of those during this time.
3 out of 5 Stars
**I received this book in partnership with Tyndale Blogging Network, in exchange for my honest opinion and review.  I was not compensated in any other way.  My opinions are my own.
Copyright ©  2010 Cammo Style Love
Cammo Style Love
Previous Post Next Post

Rhe’s Bookshelf – My Mama and Me *giveaway*