When I opened the package I was squealing with delight.  I knew what it was, and I was pretty sure I was more excited then my kids were.  Disney has been a part of my life, and is officially my first memory.  When I was three I went to Disney Land for the first time and those are some of my very first memories.  From then on Disney was such a huge part of my life – I’ve been Snow White and Sleeping Beauty for Halloween growing up,  anyone else remember Totally Minnie?  Family nights usually consisted of The Wonderful World of Disney, and I loved my Official Walt Disney World music record (you know the black on with the Electrical Light Parade on the cover) that about two years ago I finally found one on ebay and bought it.  I really wish I could find some of the Disney Encyclopedia books somewhere…they were white and there was a whole series of them.  Just as Disney was a huge part of my childhood, I hope that many treasured memories of my own children are associated with them. 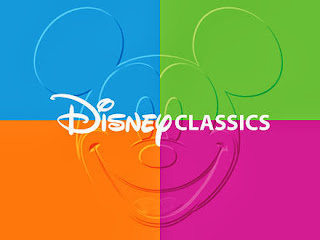 What better way to keep the Disney magic going in our home then with the new Disney Classics box set (available now!).  Pretty much every song you could ever want is included in this set.  It is broken down into four categories: Classic, Modern, TV and Theme Park.  I’m not really sure which is my favorite, but who could really pick?

I’m sure that it was a difficult feat for Disney music historian and Grammy Award winning producer, Randy Thornton.  “From the Studio’s earliest days, music has always been an integral part of the Disney creative process.  But when ‘Who’s Afraid of the Big Bad Wolf’ debuted in 1933, it began a musical legacy that remains unmatched to this day — probably the most recognizable and beloved song catalog in the world.  Even though the musical styles range from inspiring ballads, novelty songs, folk, rock, to Broadway show-tunes, Disney Music is a genre in and of itself.”  I don’t think I could have said it better myself.  Thornton’s correct, Disney songs are probably some of the most recognizable songs.  It spans generations and can garner the same attention and reactions from both the young and old alike.

As an added bonus, when you purchase the box set, you will receive the “Disney Classics Medley” from  the YouTube a capella sensations Alex G and Peter Hollens as a download.  Seriously, if you have a couple minutes this is a much watch video!  The Disney Classics box set is available wherever music is sold (and on itunes!)