*watch out for spoilers* 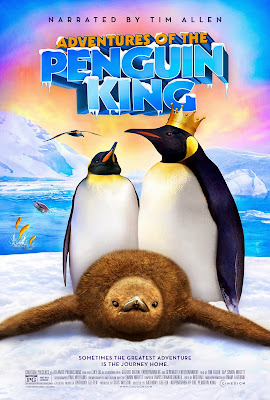 Rex, a young King Penguin, has been away from his home for three years, learning to hunt in the wild oceans, but now he’s back – in Penguin City. His mission: to find a mate, settle down and raise a chick.   But can he survive the numerous predators and the harsh conditions on an isolated island at the bottom of the world?
This is the journey of a typical bachelor King Penguin from awkward adolescent to accomplished adult.  It’s a family tale, of love and adventure, tragedy and triumph – all told through the charismatic and charming natural actors, the penguins of South Georgia.
Stunning cinematography takes us into Penguin City, on an extraordinary sub-Antarctic island, home to majestic albatrosses, brawling elephant seals – and six million penguins. Narrator Tim Allen (Disney Nature’s Chimpanzee, Pixar’s Toy Story) brings added warmth and humor to the tale, aided by a funny and dramatic script by Phillip LaZebnik (Pocahontas, Mulan, Prince of Egypt). Though our hero’s harsh world may be alien to our day-to-day lives, his struggle will be familiar to us all.

Review: Opening yesterday in limited format and on VOD and Digital Platforms like Amazon Instant Play, is The Penguin King, narrated by Tim Allen.   It can be seen in various locations across the country on IMAX.  The DVD is slated to release February 25, 2014 (on Amazon).  While the concept of following penguins around in documentary format isn’t new, I haven’t seen any of the other ones so I can’t compare the them.  The cinematography is breath-taking, the views are incredible and the penguins are adorable.  The kids enjoyed watching it for the most part.  Some parts run a little slow, and there is some gaps in the narration.  However the narration is really a pretend voice of the lead penguin so sometimes he can’t really talk clearly.  They used the word “sexy” and someone relevant to the story line dies.  That’s not really my favorite part of kid movies, which is probably why we’ve steered clear of Bambi thus far.  So be prepared for that.  The Penguin King is a fun little documentary, very “Nature-ish”.  The kids did learn some things about Penguins and some of the different animals that reside near and around the penguins, but I wouldn’t classify it as completely educational if that makes sense