Enlisted, on FOX, hits the airwaves

**All’s fair in Love and Blogging…so, spoiler alert…You’ve been warned”

So, it wasn’t as bad as I thought.  Let’s just get that out there.  The hubby and I laughed out loud a lot!!! In  my book that’s always a good sign.  Mr. Air Force isn’t really around to watch tv, and doesn’t really watch much when he is.  There are few times he really laughs out loud, like a real, spontaneous type of laugh.  And few shows that make that sound fill our house.

So in the beginning we meet SSgt Pete Hill and discover that he’s about every macho, military stereotype rolled into one.  He basically looses his mind in a sort of egotistical, I know whats best (with maybe a little bit of residual trauma from the whole war around him – in a funny way, if that’s possible) sort of way and ends up slugging his superior.  So, there’s that.  This is how we get to the plot, the reassignment to Rear D.  We also meet his brothers – Brother A is the typical gung-ho soldier, but clumsy as all get out; while Brother B is seemingly annoyed by the whole thing, wearing his uniform much like the cool kid who pretends not to care even though he does, just a little.  Their father was killed during a deployment, and now all three boys have gone and followed in his footsteps, each on a different path.  But they are soon all reunited because of the whole punching his superior thing. 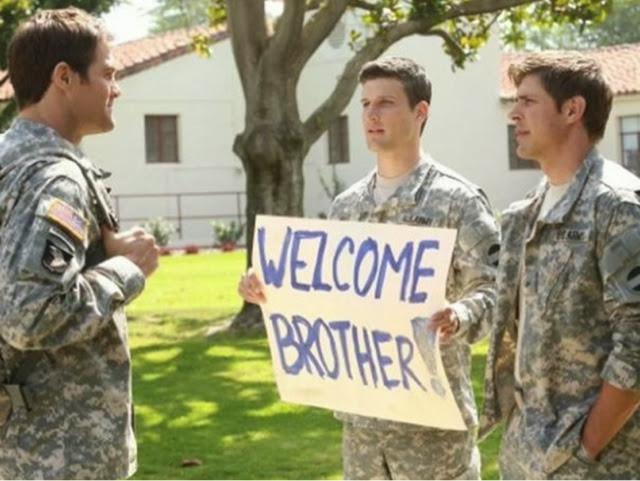 photo: courtesy FOX
The group of Rear-D soldiers Pete is in charge of are a bumbling group of misfits, and mostly you’re left to wonder how in the heck they made into the military in the first place.  It’s quite ragtag bunch of military misfits – an angry divorcee, some over-weight peeps and some bumbling fools.  Shockingly enough that’s not what bothered me.  I want to be clear that I can apprecaiate some good humor, and I get that when doing a show like this its a fine line.  If things were done on the straight and narrow I’d be watching NCIS or a JAG rerun, and that’s clearly not what they are going for.  This is more along the lines of a MASH or Hogan’s Heroes.  But there has got to be a little give and take, you can push the envelope in some areas if you keep some of the little things on track.  So let’s spot some of the SNAFUs, both large and small:
1. no covers – while welcoming big bro Pete home from deployment, the other two brother didn’t wear their covers.  There’s a couple times there are some missing covers but some outside areas are allowed when its in the scope of work.
2. sloppy uniforms – this is indeed part of one of the brother’s character.  I think it could be done, but during a welcome home on base he would have totally been yelled at (which actually might have made it funny).  So let him wear his unifrom askew..just pick a more private time.
3. Shave – dude, at least can they be clean shaven?  Even SSGT Pete was scruffy on his return home.  Really?
4.  The hair?  So the brother that doesn’t care has ridiculously long hair.  We’re talking pilot in Navy long hair.  Only they can get away with that right?  Also, one of the other guys has dreds AND is over weight?  Both at once?  Come on man!!!
5. very overweight and can not complete basic pt tasks like jumping jacks.  This is actually a technical SNAFU that I can live with.  Its hysterical and goes with the whole misfit theme.  I think if you start taking that stuff away you won’t really have a comedy.  So FOX, I’m cool with that.
6. hands in the pockets – again, the unaffected brother, part of his character’s whole “pretending not to care deal.”  But dude, military 101!  no cover, descheveled uniform, long hair and hands in the pockets?
7. dogtags out – saw this a couple times.  usually they are under the shirt.  not a big SNAFU, just something I noticed. 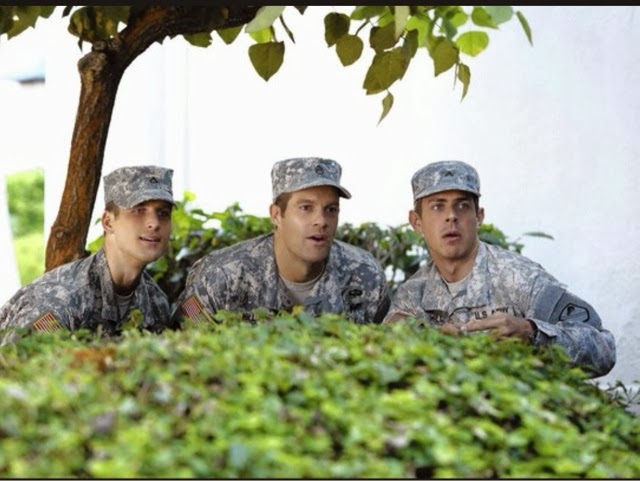 There’s an annoying Defense Contractor, a General (who is also an Uncle/Father Figure) that is an amputee but still on active duty (which I thought was really cool, because that can happen!).  The Italians and the war games was absolutely hysterical and wrife with inaccuracies, but hysterical none the less and both Mr. Air Force and I were totally cool with it.  There was even some sweet and sentimental, girlie “awwww” type stuff at the end.  In fact I really loved the ending.
Overall we really liked it and I hope it lasts.  I think its perfect for this generation.
Mr. Air Force and I were both in relative agreement, at about 3/4 stars out of 5.  It wasn’t totally offensive (with plenty of acceptable SNAFUs), but we’d like to see more creativity.  Its not a wholly originial concept, but a good update for the generation.  We’re excited and hopeful that it will continue on a good direction.  I think the whole ‘Spot the SNAFU’ thing that FOX put on was pretty ingenius and a great way to endear themselves to the military community.
You can catch Enlisted on FOX Fridays.  Check your local listings.
Did you watch?  What did you think?  Id especially like to hear from any of my non-military readers.  I’m kinda curious to know what you guys thought.