Bounce Back and the New Social Media Powerhouse

The blogging community is a pretty cool one, although I may be biased.  Some of the most amazing people I know I met through the blogging and volunteering work, and sometimes both.  It is a source of friendship building and discovery.  The things that I’ve learned about from my fellow blogging pals, from blogs in general, as well as the information I’ve gone to blogs to find, is crazy.  The power that blogs can wield is astounding at times.  You might have seen me blog, tweet and facebook about the upcoming Indie project The Bounce Back.  (My first blog post can be read here) 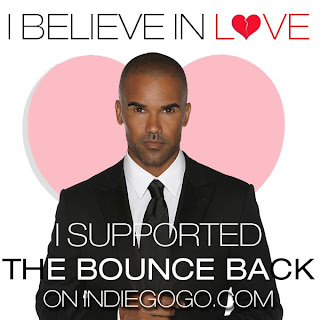 I was so completely thrilled to be a part of this campaign from the very beginning.  First of all I jumped on board because my awesome friend Erica was heading it up, she’s a fellow milspouse.  But secondly, ummm hello..its Shemar Moore.  I’m a huge fan, mostly from his Criminal Minds acting….I’m a complete Crime Show nerd.  So this post is part introduction and part update.  As of today, right now, we have well exceeded our originial goal of $500,000.  We are at $605,810!!  How incredible is that?!  There was a part of me that was just wondering how this was going to be accomplished.  I remember hearing about the Veronica Mars thing and just being blown over.  I mean, these are just regular every day people who have a passion about something like a tv show.  It can seem silly when you just say it like that, but people know what they want.  How many movies and tv shows get made and you’re thinking, “What, really?!”  This was the chance to get something made because people wanted it to be made!!  We’ve set some records people!!  The Bounce Back is the #1 funded movie on indegogo and look at these stats for crowdfunded projects:

Fourth of all time?!  What?!!  The power of the people my friend, the power of the people.  So, today I wanted to share with you that this power is going to be taken to a whole new level, with the creation of the Entertainment New Media Network.   Blessed, isn’t really the word for it, but to be a part of something new like this is exciting!  My new boss said it best:

There truly is power in numbers, and in Hollywood numbers are power. Entertainment New Media Network is where the two meet.  -Erica I. Pena-Vest

I get to be a part of a new network of bloggers that are working on entertainment-related campaigns; proving that there are power in numbers and that this power lies with regular people who have grabbed hold of a vision and gone for a ride!!!

If you’re just hearing about this campaign…welcome..check it out and see if you want to be involved, contribute, whatever.  Ask me questions!!  I’d love to answer them.  And let me know what you think about the project.  Have you watched the video about it?  Are you a Shemar fan?  What do you think about the power of social media?

The Bounce Back #TheBounceBack Huge Giveaway!!

Welcome to our giveaway. We are in the home stretch of this campaign.  We are so thankful for all the support and feedback so far. The Bounce Back film officially became the most funded film on Indiegogo and that is all thanks to you, the fans! To celebrate we have an amazing giveaway for you all. One lucky winner will receive two tickets to the movie premier and after party in LA! Good luck and thank you for helping us make this dream of our’s come true.
Read why I became a part of the campaign here!  Thanks for stopping by and good luck.  Make sure to check out my own giveaway for the movie.  You will have a chance to win an exclusive t-shirt.