Why Should You Celebrate Valentine’s Day? 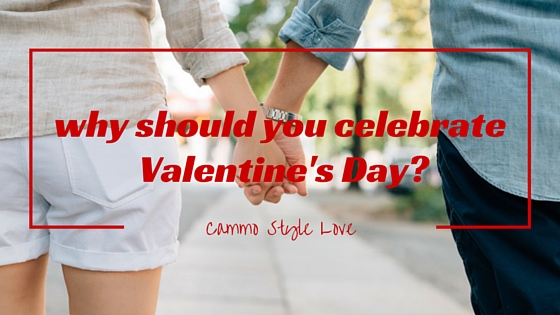 I’m a succor for a good holiday. Give them to me and I’ll celebrate like it’s 1999. Fourth of July, Easter, St. Patrick’s Day – whatever the occasion, it doesn’t matter, you’ll find me loving it. It’s the not the gifts, or the Easter Baskets. It’s not the chocolate or fire works or the singing. It’s the tradition of it all. It’s the history that lies deep inside each special day. Not only am a I a succor for a good holiday, I’m a succor for a tradition and a story. Valentine’s Day is no different, and I think it gets a bad rap. I can’t tell you how many people have told me, “Oh it’s a manufactured holiday, created by greeting card companies,” or “We don’t need a designated day to show our love!” Sure, all this is true, sort of; but I love Valentine’s Day and I fully believe to in celebrating a day that is really special. And just like with many holidays, greeting companies and department stores have created a commercial nightmare! But do we stop celebrating Christmas and Easter like we do Valentine’s? I mean do I really need a special day to acknowledge my faith and my believe in Jesus Christ? Nope!

what is Valentine’s Day? Why should I celebrate it?
One of the best illustrations of what Valentine’s Day is really about can be found in the children’s radio series, Adventures in Odyssey. I know, I know, sounds silly. But in a special series entitled “Wooten’s Whirled History” my kids have been exposed to the story of Valentine. I too have enjoyed listening to these stories with my children. In “The Last I Do,” we hear the story of Saint Valentine, who in the third century, performed marriages despite an edict brought down upon the people by Claudius. After he was arrested he attempted to convert Claudius, which led to his execution. While it is a sad story, it highlights the belief in love and marriage and that is simply lovely. 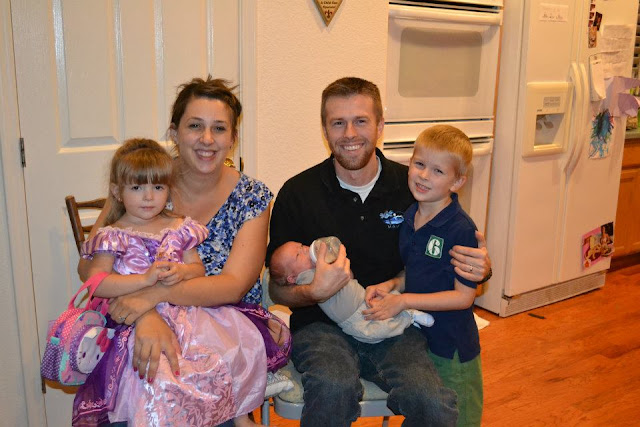 Here we are almost seventeen years and three kids later, looking towards our twelfth year of marriage. Valentine’s Day might look a little different, and we may not exchange elaborate gifts every year as we once did, BUT we still both believe it is important to take a moment and make the day a little more special. This year was more low key, hubby bought me some flowers from CostCo, I got him a card a snoopy chocolate heart. Maybe next year we’ll get a sitter and dress up and go out! I still remember many of our Valentine’s Day dates vividly. They aren’t any more important than another day, but they were significant to our relationship none the less. Big or small, you make them what they are, and they are but a small reflection and “Day of Remembrance” to celebrate our love {and for us} our marriage. I don’t think anything is wrong with that, and in fact I encourage you all to do it. Don’t let the argument that Valentine’s Day is simply a Greeting Card holiday. Don’t let something like that rob you of what it can really represent for you and those you love.
All beautiful you are, my darling; there is no flaw in you.
~ Song of Solomon 4:7 {NIV}

This week will mark eight years of marriage for me and the hubbs.  Whoa!  I really can’t believe that it has been that long since we got married.  Its been fourteen years since our first date, that’s even stranger.  So to commemorate the event I’ll be sharing some bits about that amazing time.  I wasn’t blogging that long ago, I’m not sure how big blogging was in 2004.  I know it was out there, I just wasn’t doing it.  A lot has changed since 2004.  This idea came from a wonderful bloggy friend, and fellow MilSpouse, Madeline over at Food, Fitness and Family.  When you get a chance you should check out her blog.  She has some amazing fitness and healthy eating tips.

For this post I want to start with the engagement……

I’m not gonna lie, it was pretty amazing.  My husband is pretty rockin’.  We met in 1998.  He was a boy scout and I was a girl that volunteered for a local Crisis Pregnancy Center.  His troop was associated with the church I went to, although he didn’t attend that church.  We had lots of mutual friends but hadn’t met really before.  We really got to know each other volunteering for an annual fundraising tea and auction.  After that I became the President of a local Teen group that did a lot of service projects.  He started attending meetings and group functions, we volunteered together more.  Then he asked my dad if I could go with him to his Junior Prom (although I know my mom was really the driving force behind letting me go – thanks mom).  He had been homeschooled until high school, I started homeschooling in high school.  He was pretty reserved and shy, and going with me was a fun, easy thing to do…as friends.  We started hanging out more and were just getting closer.  He says he knew almost right away that he wanted to be with me forever.  Pretty surprising at the ripe old age of 16 and 17, but every once in awhile it happens.  He said he loved me first, he’s fought for me, protected me, and saved me from a lot of things.  He made choices that lost him things in order to keep me.  It’s still emotional for me to think about an 18 year old kid making the decisions and choices he did.  He joined the military two years before we got married, not long after we got engaged.  He bought the ring and had it paid for a year before he asked (so responsible and so like him still).  He picked it out by himself (and my wedding ring). 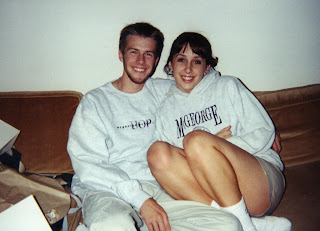 Matching Law school sweatshirts – when I had aspirations of becoming one 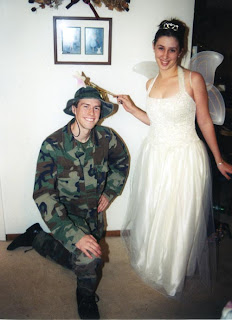 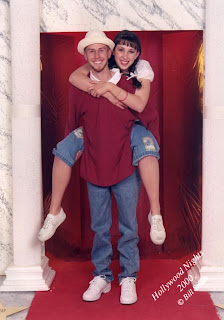 Gilligan and Mary Ann for the Sadie Hawkins Dance 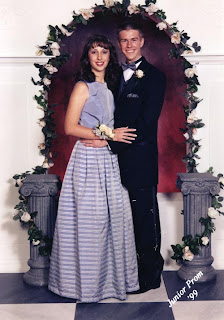 There’s that first date in April 1999 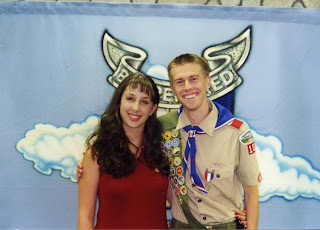 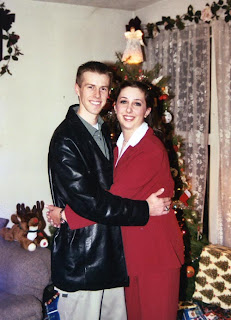 The night we got engaged! Christmas 2002 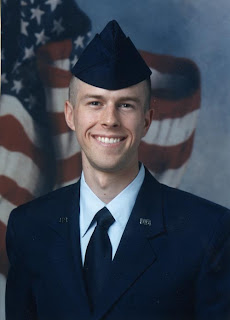 Our first date was really Junior Prom…that’s sort of what we count it as anyway.  He took me to what was my favorite restaurant at the time.  It was called Sheepherders Inn. It was this amazing, rustic location, with a big fireplace and a restaurant I frequented with my mom and her best friend (who I called ‘Aunt’).  Christmas Eve 2002, we went to that same restaurant, to the same table (yup, the same table right by the fireplace), where there were a dozen roses on the table.  It was a surprisingly busy evening, which he hadn’t been expecting.  There were easily 50+ people in that room.  Despite all that he got down on one knee and told me how much he loved me, and how he couldn’t imagine spending a moment more without me, and would I please be his wife.  Well, duh!  LOL!  It was wonderful, and people were so respectful and didn’t cause a scene (which I think he was secretly praying the whole time he was down on his knee and shaking out of his mind!).  After dinner we went to Christmas Eve surface at church.  My family was there and my mom knew we had arrived my shrieks of my girlfriends in the lobby when we arrived.

It was such a crazy time in my life, emotional and wonderful.  I wish I could go back and watch it happening, savoring that sweet moment, when we were young and sweet.  I wish I had more pictures to share, but seriously it was 2002 and we so did not have a digital camera back then.  Those were really expensive things that only some of our parents had or really rich people.  If you had one in 2002 and you’re neither one of those things I’m sorry….but also a little bit jealous, LOL!  But here’s some stuff I do have and can share. 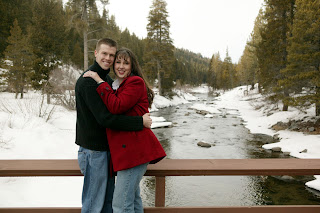 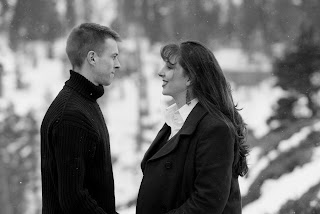 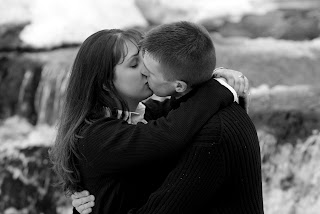 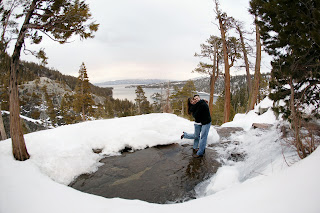 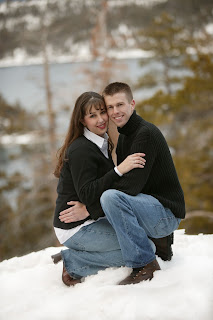