Continuing on with the MilSpouse Stories series I wanted to talk about something most military spouses will get when they see the title….”Deployment Boyfriend.”  Don’t worry, its nothing sinister or scandalous. In fact, with most of my friends its a running joke. You might have heard the term, “surrogate spouse,” or heard Army wives giggle while talking about their ‘Jody’. 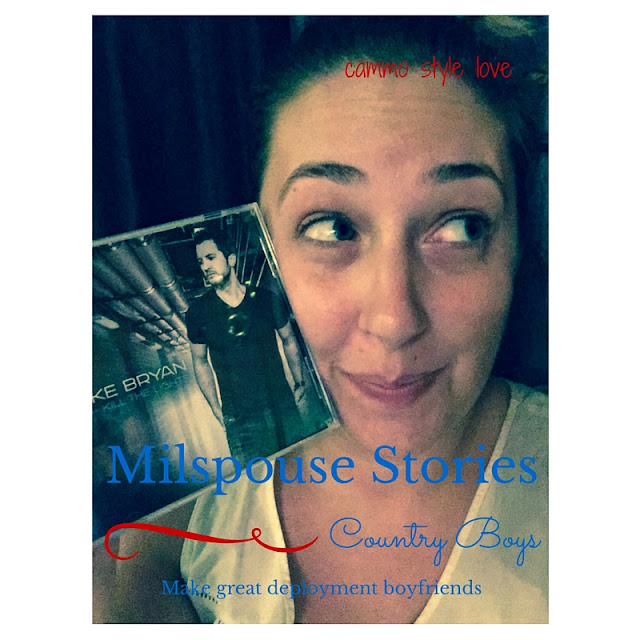 Music has always been connected to my soul. All of my emotions are wrapped up in music, and it wouldn’t be a rare occurrence for a song to bring tears to my eyes. So for me, I turn to music in times of separation from my husband, usually romantic ones or happy, fun ones. The last time around it was the boys of country music – Luke Bryan, Cole Swindell, Sam Hunt, Thomas Rhett, and the list goes on. They cheered me up, made me cry, made me sentimental and romantic feelings. For some people its movies, and books…or maybe its their crafts or going out. Everyone has things that keep them busy or preoccupied. For me, its my escape, my happy place. One might say I get a little obsessed, but sometimes you just need to get away from it all during these times. The overwhelming aspects of facing many months alone is at times daunting, no matter how many times you’ve done it. I consider myself to be an expert at it, but that doesn’t mean I handle it with expertise every time. The other day I was watching the CMAs, and Luke Bryan was accepting his entertainer of the year award. I got a little teary as he thanked his wife for sticking by him as he goes out touring for months and months on end. Granted, he’s not deployed at war, but that doesn’t mean she doesn’t miss him like  miss my husband. And here she is sharing him with the whole world and countless ridiculous female fans, like myself. The music gets me through the rough times, and I think its only fair to thank those that make a small sacrifice to share their talents with the rest of the world right?

Music is the very essence of many people’s souls. They get it, it speaks to them. And sure the people who are giving it to us are celebrities, make tons of money, get to go to fancy parties and have a status that puts them in the limelight. But they bring music to us, and that’s awesome. Its part of our parties, weddings, road trips and funerals. Our favorite movies usually have amazing soundtracks that draw emotions out of us, without us even realizing it.

So thank you country boys (and your wives and families), for giving me the music that helps me get through the tough times and happy times. Thanks for being my “deployment boyfriend.”

Check out this amazing new book, written by Spouse for Spouses!