On a Mission with National Geographic Kids

I’ve talked about National Geographic Kids before and I’m so excited to share the latest from them! The National Geographic Kids Pleybox subscription is the perfect gift for your curious little ones. Winner of Best Green Toy and Brainchild Toys, and parent approved, send your kids on a mission to discover the Great Barrier Reef, the Serengheti, the Artic or the Amazon. Learn about each areas endangered species and become an Expert after you complete your mission.

My kids are obsessed with National Geographic Kids books. We’ve amassed quite the collection in our home. Partly due to the awesome gig of being a blogger’s kid; but most of the time NGKids books are part of their library checkouts, or requested as a gift. So I knew right away these little mission suitcases would be a huge hit for us. In the boxes we got one of the famed NGKids books, a super cool shirt with corresponding animal, stick sheet, collector cards, and in the Serengeti one my daughter got a little bracelet and two mini animal figurines.

At the end of your “mission” to learn as much as you can about the area (and the animals) your box is from you get your Achievement Certificate! I make mine earn it by teaching me all about what they learned. It is a great interactive tool for the whole family to use.

Lastly you are able to access a fun, interactive online game, where you can learn EVEN more about the area and its wildlife! After that…your mission is complete!! But the fun doesn’t have to end there. You can keep going back to revisit your mission with each box you get, combining your knowledge. These subscription boxes are only $17.99,  making a Pleybox Mission box a super cool and unique gift for a cool kid in your life. I know that I’m always looking for unique, non-toy, related gifts. NGKids Pleybox’s are definitely on my list of unique gift giving that both parents and kids will love!

Visit their website to find out more, and learn how to get your own mission box!

A big thank you to National Geographic for your partnership on this event.

When I stepped into the press room that was set up in one of the auditoriums on Fort Hood I was expecting a typical press junket. The ride over in the bus should have tipped me off to the fact that my experience would different than any that I had before, but those are stories that I keep all for myself. None the less I wasn’t expecting to have the very deep, emotional experience I have ever had. The week before I had been in a room with other military bloggers, entrepreneurs, and influencers as we sat and listened to two of the soldiers who had been there that Sunday, as well as the director of the mini-series. We watched an extended trailer, and while there was an important emphasis placed on the families that were a part of this story, I didn’t feel it. The trailer shows parts of home life, the typical military experiences of goodbyes and phone calls. The phrase, “not another war movie” was thrown around. But all this still did not prepare me for what The Long Road Home really is.

I was privileged to be at the Fort Hood premiere of The Long Road Home, sitting in the very auditorium the 1st Cav deployed from, sitting amongst the families of those depicted in the movie, and alongside the men that were really there. I count myself lucky in my life, because if we’re honest who wouldn’t want to find themselves sitting at a star-studded event. But, as I sat in that press room it became very clear to me that this was not about them, and that everyone standing in front of me had been forever changed by their experience filming this series. It was the first time I had ever found myself crying while trying to ask a question. More on that on my podcast this week, so make sure you check that out.

Back to the reason we were there. National Geographic has outdone themselves, by joining with Martha Raddatz, author of the book, and screenwriter Mikko Alanne. Everything they had said over and over again last week at the conference I attended, and tonight in the press room was true. The powerful story that was on the screen had very little to do with other war movies I have seen. So much time was spent on the families. It was true, this was different. The downside of all of that being true is that I was sitting there watching my life on the screen. The words coming out of the mouths of the kids on the screen were almost exact reproductions of what has happened in my life. That feeling when your cell phone goes off in the middle of church because no milspouse in her right mind ever turns her phone off for fear of missing THE call. The real anger I felt when the issue of “rumors” was addressed. It was because all of those things had either happened in my life or in the lives of the people I know.

As the lights in the auditorium slowly flickered on, after watching the first two episodes, there were tears and hugs around the room. Couples held hands and slowly walked out silent, families held each other close and friends gave each other hugs. Sitting and watching feels like going through something. Its a lot to process, but the process is important. We are heading into eighteen years of this. We hear constantly that the American public is tired, that they are forgetting. I get it. But I hope that the words echoed by many that took part in the creation of this series ring true. That this reminds everyone of what military families go through still. That people can stop and process that these are people and that you don’t have to be pro-war to be pro-military.

I hope you watch, in whatever way you need to. Take your time and really watch what is happening on the screen. You will be changed, that I can promise.

Thanks to one of my wonderful bloggy and fellow Mil-Spouse pals, the hubbs and I were able to take part in the DC Premier of SEAL TEAM SIX: The Raid on Osama Bin Laden, at the Newseum last week.  By now the movie has aired on National Geographic, and if you haven’t seen it I really suggest that you find a way to watch it. 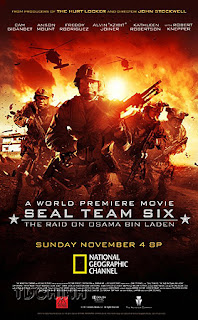 I was given the amazing opportunity to attend from a Blue Star Families, and a very awesome friend of mine.  Attending was one of those experiences that I could almost not really describe to someone.  Being at a premier is pretty darn cool if you want to know the truth.  We hadn’t had the chance to make it to the Newseum yet, and after seeing a glimpse of it that night it is going to the top of our list of thing to do.  The Museum was amazing and they catered to us extremely well.  Working with National Geographic, as they did, it made it truly a night to remember. 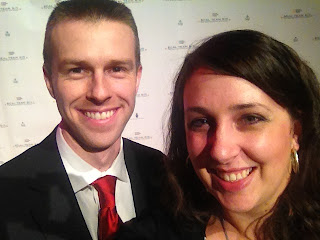 Me and the hubbs on the Red Carpet

So, lets talk a little bit about the movie.  The movie stars Cam Gigandet (Easy A, and that movie with Cher and Christina Aguliera – and freaking adorable), Anson Mount, Freddy Rodriguez, Alvin “XZIBIT” Joiner, Kathleen Robertson and Kenneth Miller.  People you will also recognize are William Fichtner (Entourage, Blades of Glory and Black Hawk Down), and Eddie Kaye Thomas (Paul Finch in the American Pie films).    So, yes, it is an actual straight up movie, not a documentary, not one of those weird inbetween films I’ve seen before.  No, it is a feature film type movie.  It is amazingly acted, excellent filmed and great time was taken to get accuracy in what was portrayed.  And although what actually occurred isn’t, and may never be, fully disclosed to us there is enough out there and good guesses can be made.  The hubbs recently read No Easy Day and that provided him with a whole other perspective on the movie. 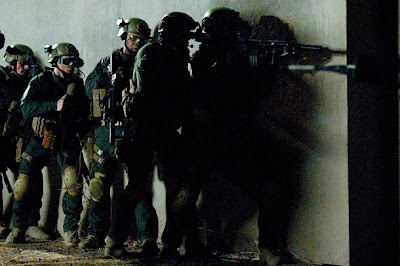 Unfortunately there was a lot of political “stuff” floating around about the movie.  I heard plenty of input from both sides.  Many people said, “I don’t see what the big deal is.”  But if you want me to be honest, if you take into account the involvement of Harvey Weinstein, some of the things that he originally wanted to put in but had to remove, and the timing, it is almost impossible to not at least assume there was some sort of political-ness going on.  Although it was obviously denied, and will probably always be…..with the presence of so many circumstantial things I would have had more respect for them if they would have least acknowledged the fact that the cloud was hanging over us.  My husband is always telling me that I like to be angry.  Of course he’s sort of teasing, but I do have my opinions and I can be pretty loud about them.  So, the fact that I didn’t get all uppity about this movie, and the political cloud, shows you that it just didn’t really seep into the movie.  There were scenes of the President and audio of him talking, but it was all very relevant to the story line. 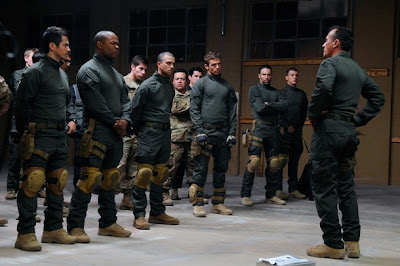 A ton of information is jammed into the movie.  You gotta pay attention, and it is really helpful to know a little more about things – more than just what the news reported – to really engaged fully in the movie.  By the time it was over I was crying and had decided that when I grow up (ha! ha!) I want to be the CIA Analyst that Kathleen Robertson’s character was based on.  She’s a rock star, and I’m sure she’s rock starring it up in the CIA right now!  Seriously love her!  From the perspective of a military wife, and as part of a military couple, this movie was great, 4 Stars.  From a regular movie-goer’s perspective it might not be the best movie out there.  Like I mentioned earlier, it moves quickly; but it also has interview type segments, characters are fully developed, sometimes you think there’s something more to a character by the way they look or little things you notice and then nothing is ever explored further about them.  It didn’t go un-noticed by me for sure, but there were so many other things that I cared about in the film that they weren’t important to me.  From a real movie critic’s perspective, it is probably an easy way for the writer and director to skate around things.  You’re telling a story about one of the biggest parts of modern times, something that our generation will talk about like our parents talked about JFK, and where they were when it happened.  So you don’t necessarily have to do all the normal things that you might do in a movie, if it weren’t about that, and if it weren’t on the small screen.

Check it out for yourself, and let me know what you think – if you have seen it, or if you see it later.  Make sure to check your local listings for re-airings, and also for the rest of the new shows that are part of a six-night television event.

All movie photos courtesy of National Geographic TV (website). I received tickets to this even thanks to Blue Star Families, as a guest. I was not compensated in any way for my review or thoughts. The are my own.