Maybe the housewives weren’t so bad…..

Like I’m sure many of you have, I have gotten sucked into the Downton Abbey craze.  I’m already a succor for period movies and shows.  Something about the costumes, the hair, the language – clearly I look at it through rose-colored glasses.  At times it was like watching a train-wreck.  I spent most of the time laughing or being really annoyed by the whole “I can’t dress myself or do my hair” attitude.  What really sent me over the edge was when Mr. Lord of Downton decided that Thomas couldn’t help himself because he was born that way, and didn’t turn him in, but was almost physically ill at the thought of walking into a Catholic Church and having his grand-daughter baptized in it.  Am I really expected to believe that?  Har-de-har-har!  When the next season rolls around I’m sure I’ll be sitting there, ready and waiting to be sucked in…but I’m also sure that the whole “Matthew sees the girl that Mary really could be” will still cause me to roll my eyes, although I have high hopes for her character. 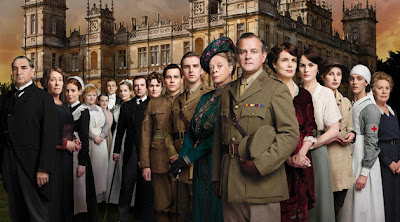 But, it made me think.  All these women, generations of women that didn’t do anything.  Literally, they didn’t do anything.  They weren’t a Stay at Home Mom because they didn’t take care of their kids, and they weren’t a Working Mom because they stayed at home.  The poorest of poor, obviously didn‘t have this luxury, but when I watched more and also thought back on many other period movies that I’ve seen, even the marginally rich, still had servants and really didn’t take care of their kids either. They didn’t change diapers or really play with their children.  They didn’t teach them and they had wet nurses for crying out loud.  Those that were up the upper class wouldn’t have taught their children to cook or clean, and would have expected them to continue on with that.

source (great article about Rosie herself)

So, maybe those housewives of the fourties and fifties weren’t all these mindless females that were just listening to some man tell them what to do.  It is clear to me that they were anything but that.  The contributed to the wars – even as far back as the Civil War, when husbands and fathers were gone for years!!!  Look at the women during WWII, seriously, women are awesome that’s for sure.  You’ll find no argument from me on this.  So after generations of women doing nothing, then women doing everything…what if they just didn’t want to do everything?  What if they wanted to stay at home and raise their children because they missed out on it.  What if they saw how crazy life had been for them in previous years and decided once they had kids they weren’t going to do that anymore.  Maybe they weren’t made to stay home, what if they truly had wanted to do something else with their lives but once they had kids, realizing that their mother’s weren’t around, or because they had been busy, they wanted to be around for their kids.

It may seem like I’m over-simplifying a very complex thing, spanning generations, caste systems, countries and life-styles.  But the second it came to my head it was like a light-bulb switched on.  It really, really hit me after watching Mary Poppins.  So crazy, I know, but the mother in the movie is in the middle of fighting for women’s rights.  There’s a whole song that she sings at the beginning about it.  “Our daughter’s daughters will adore us, and they’ll sing in grateful chorus…..”  It sort of struck me as funny.  She’s in the middle of hunting for a nanny because she can’t find one to raise her children…….if I was going to get all psychological on ya’ll I would probably wager to guess that if the kids had had consistency and a firm and loving hand (ie: their mom and dad) then maybe they wouldn’t need Mary Poppins.  This really isn’t meant to be a commentary on today’s SAHM/Working Moms….this isn’t me trying to pick a fight.  Its just me saying maybe this is where those fifties housewives were coming from.  Maybe they weren’t so bad after all and we should give them a break.