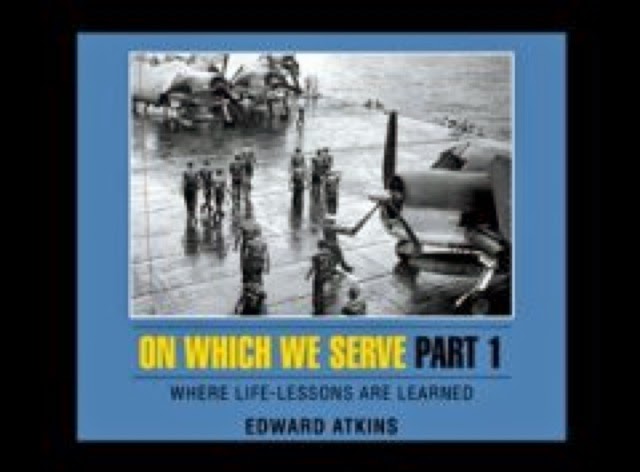 Today’s #MilitaryMonday post is also a Rhe’s Bookshelf post.  I am thrilled to be reviewing On Which We Serve, Part 1 – Where Life-Lessons Are Learned, by Edward Atkins.  Edward Atkins grew up in New Jersey and went on to serve in the United States Navy in WWII.  He continued his connection with the military throughout most of his life.  This book is part of a trilogy of books about life on an Aircraft Carrier, as well as life in the MIlitary, during WWII.
Summary: The title, “On Which We Serve” is an anthology of values and virtues as derived from the activities taking place on the flight deck of a WWII fleet aircraft carrier as experienced by the author. This book consists of 355 full-page National Archive photographs, each of which has a half-page caption that seamlessly segues into a half-page discussion of life-lessons learned on that flight deck based on First Principles. These topics are such as responsibility, accountability, respect for others and self, earned self-esteem (those who have such will “never” do anything antisocial), empathy, trustworthiness, and similar values and virtues. The title also embraces the Navy motto: Honor (to see one’s duty), Commitment (to do one’s duty) and Courage (to fulfill one’s duty). This book is truly unique in that it is one of a kind for all time (first person) as well as being timeless.
What I Thought: As a military spouse and the granddaughter of both a Korean War Veteran and a WWII Veteran, books like this can be extremely thought provoking and emotional for me.  They have the ability to transport me through time and try to imagine what it must have been like for those that served during this time.  Things were so different back then, and to get an inside peak at what that must have been like from someone who was there is a priceless piece of history.  These are truly life-lessons for all of us, and they should be passed on to our children and grandchildren.  The author talks about the carrier at times, comparing himself at time to the carrier.  It is clear he has a deep love, understanding and respect for not only the ship, but what he is doing on it.  That comes through in his words clearly.  At times it seems as though my grandfather is speaking to me – talking about hard work and doing the right thing.  Things it sometimes seems as if our society has lost sight of; stopping to think about something other than themselves.  Aside from being an extremely well documented history piece, it is clearly a deeply personal one.
I would recommend this book to anyone who particularly enjoys this time in our countries history, but servicemembers would do well to read such accounts.  A kindred bond can be felt even decades later.
This book also contains amazing pictures that coincide with his story, and life on the ship.  It’s really the pictures that move me the most in this book.
5 out of 5 stars – I truly love this book.  Between the beautiful, yet deeply realistic picture of life on the ship and the beautiful photographs that further tell the story, it is a book that every household should have.  The greatest generation, as they so fondly have been called, is an intrical part of our countries history, and one which is quickly leaving us.  Holding on to stories and images like this is vital for going forward.  This I believe whole-heartedly.
Copyright ©  2010 Cammo Style Love
Cammo Style Love
Continue Reading