This is why I love military wifey’s!!

So here I am on my little blog, in my own little world, surfing the net and finding all these lovely blogs out there. One of the first people that started following me (that I didn’t know) was Staci of  The Crafty Military Wife.   You should really go check her out when you get a chance. Not only is she an awesome blogger, but she is a mommy, a wifey, has an etsy shop and does all this cool design stuff. Anyway, i asked her to make my blog button and she totally delivered!! check it out below and then head on over to The Crafty Military Wife blog and say hi to stacey and tell ’em Rhe sent you!!!

Well most girlies, including this one, love pink! And another thing I love is supporting Breast Cancer research. One of my dear friend’s mother passed away from breast cancer and my grandmother endured it, finally passing from cancer that had spread. Another one of my loves, knitting and crocheting! And Bernat has announced special edition PINK yarn, with proceeds going to support the Susan G. Komen foundation. So I have a special offer listed on my facebook in honor of this! 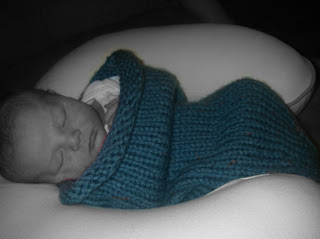 So my first blood nephew was born on September 9th, Ryland Mason! Imagine how excited I was to have another little one around I can snuggle and hold, but a little tiny model right at my fingertips! So I wiped up one of my snugglie cocoons, thanks to http://mrsmissymuffet.blogspot.com/2010/02/laurel-love-cocoon.html, and it was apparently the hit of the hospital! Who knew he would literally be a walking advertisement!? He is pretty much the cutest thing ever. So I will take this time to place the link to my shop in a shameless effort to promote myself. But who can resist!!? Look how cute he is!

The Art of Communication

Most people that know me well will tell you that I love all things old-fashioned, and I’m a stickler for etiquette. As of late I’ve been continuously inspired to write a little rambling about such things. Recently I’ve seen a huge rise in important information being spread on-line and via text message before being told any other way. Baby announcements, engagements, party invitations and other such things. Personally I find it absolutely horrifying. Don’t get me wrong, the internet and social-networking sites are amazing. I have connected with friends from long ago, I can see pictures of them and their families that I wouldn’t normally see, I personally stay connected with friends and family that are far away and pictures of my kids can be seen by them. I love it! But just like using calculators and computers in school has nearly eliminated a child’s need to learn actual math and to write in beautiful cursive handwriting, the internet and social-networking has literally run over etiquette. I’m pretty sure Emily Post would roll over in her grave if she knew how little respect is giving to the abbreviation R.S.V.P. And who writes thank-you’s anymore? I’m currently in the process of working on thank-you’s for my four-year-old’s birthday. Yes I know he can’t read or write, but he’s coloring on them and the point is for him to understand that you thank people when they give you a gift. I wouldn’t be surprised if by the time he’s an a teenager he will be the only one for miles and miles that writes in cursive, doesn’t make important announcements or invitations on the internet, doesn’t own video games, R.S.V.P.’s on time and writes thank yous. So in revolt if you consider to be a close friend of mine do not announce anything of great importance or invite me to anything of any significance via facebook or textbook. I will most likely ignore it. *she said with a wink and a smile and with the voice of Emily Post ringing in her ears* 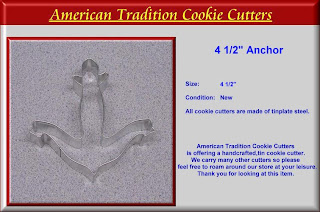 Have you ever thought to yourself, gosh if I only had a cookie cutter shaped like a lighthouse? Well I recently thought to myself, I wonder if I could find a good cookie cutter in the shape of an anchor. I popped up Google.com on my website and up came American Tradition Cookie Cutters (http://www.americantraditioncookiecutters.com/). American-made cookie cutters in just about every shape you could possibly imagine. So please go on over to American Cookie Cutters and find your perfect cookie cutter!